On the Ball: Designing a Gala that Continues to Shine

The American Cancer Society’s Discovery Ball gala is always a wildly successful fundraising affair. We look back over six years of design of the gala.

For the last six years, it’s been our pleasure to design the American Cancer Society’s prestigious Discovery Ball gala. This marvelous affair continues to rank among the top benefits in the nation, and has consecutively been ranked as the number one charity event in Chicago for the past four years.*

We caught up with our VP of Sales & Design, Rishi Patel, to learn more about how he works alongside the organization to keep the gala on top, and over the top.

DIFFERENT STROKES
When it comes to wedding design, there’s almost always a vision: an inspirational thread that’s woven into every layer. It’s a guiding but flexible force, and a broad way for couples to speak their style through their chosen elements. But what about galas?

When it comes to galas, event design and décor have an entirely different role to carry out: to successfully and compellingly portray an organization’s specific mission. Ultimately, there’s a lot less wiggle room: the theme must be clear and resounding. Especially when the cause is as important as that of the American Cancer Society.

THEME TEAM
Each year, the event board fashions a theme, and this is where the gala truly begins. Next, it’s up to Rishi to interpret, enhance, and take it to the design level.

But the theme shouldn’t hit you over the head; it should envelope you. Thematic elements must be cohesive and comprehensive without sacrificing taste and elegance.

Luckily, Rishi is up to the task. In fact, what he likes most about gala design is the ability to step further outside the box.

“The potential for creativity feels limitless when you are able to consider unconventional materials, applications, and concepts that might be otherwise inappropriate for [more timeless] social events,” he says.

So where does he begin? Initially, Rishi says to always let the space inspire you. “We also always look in an opposite direction of where the event has gone before,” he adds, “considering aesthetic elements that will help to sculpt the sentiment of this year.”

TEAMWORK MAKES THE DREAM WORK
So what makes the Discovery Ball such a wildly successful affair? For one, the ACS has an entire team dedicated to making the best possible big-picture decisions. “Their team directs every element of the event like a theatrical show,” notes Rishi. This focused decision making makes for an incredibly thoughtful process.

In addition, hundreds of volunteers and high-level corporate sponsors such as Coca Cola, United Airlines and Advocate Health Care all play their role in the fundraising and logistics.

Another distinctive aspect is the fully collaborative nature of the event: as the creative backbone, Rishi and HMR are involved not just in the décor, but also in the flow, timing, and overall feel of the gala. 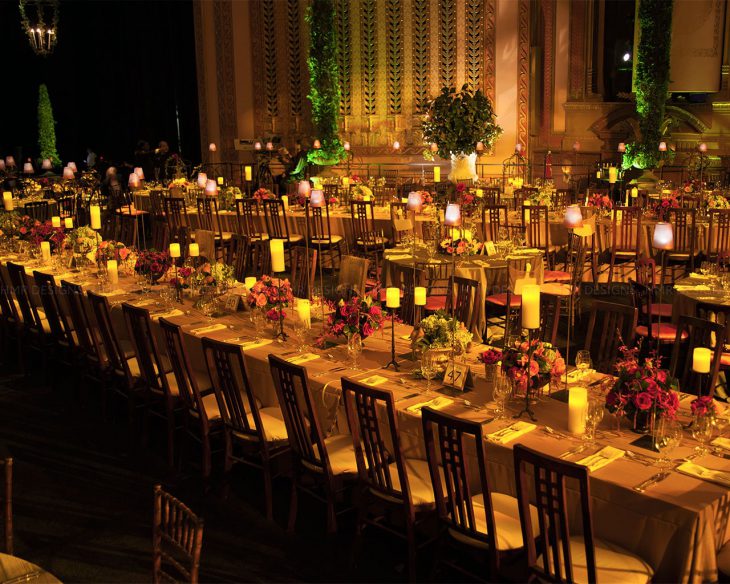 “Creativity is applied to the message, the structure, the timeline–not just the décor,” says Rishi. Important components or areas of the evening are emphasized to make sure the fundraising efforts are successful. And they always are: the 2016 gala raised $2.4 million towards the fight against cancer.

Ultimately, this annual event shines because both the ACS and HMR take a huge amount of pride in the cause. And with that cause always in mind, anything but great success doesn’t seem an option.

So then, does Rishi have a favorite from years past, you ask? He simply cannot choose. “They are all vastly different,” he says. “But equally special.”

We’d like to extend a special thanks to the amazing Discovery Ball Team:

And also many thanks to the Hilton, the Radisson, and Civic Opera House, Frost Lighting, Fandl Photography, Kent Drake Photography, and of course, to the American Cancer Society.

Finally, thanks to Rishi for his significant contributions to this post.