Architecture is, without a doubt, one of the most gorgeous, large-scale lasting means of artistic expression, especially when created with thoughtful longevity in mind. Some of Chicago’s oldest and most revered architectural wonders originate during the World’s Columbian Exposition of 1893 (more commonly known as the first World’s Fair).

Historians also know Imhotep, who lived around 2600 BC and served the Egyptian pharaoh Djoser, as the first identified architect in history. Imhotep is credited with designing the first Egyptian pyramid complex, which later inspired the larger, more extravagant pyramids.

While Imhotep is well known, a number of other Chicago-centric architects top the charts today as the most famous in the world. From Frank Lloyd Wright to Jeanne Gang to Frank Gehry to Ludwig Mies van der Rohe, Chicago has had no shortage of prominent names which have lead the charge of the industry.

Bjarke Ingels Group—better known as BIG—is famous for its playful and simplistic statement making architecture. BIG is also known for its cleanly unique designs, which demonstrate logical yet bold ideas which have never before been seen. Ingels himself has famously stated “architecture is about trying to make the world a little more like our dreams.”

BIG’s stance on sustainability is also clearly apparent in their body of work. He has famously coined the phrase hedonistic sustainability, which suggests that environmental building elements should not be afterthoughts but should be closely intertwined with the building design + program. This idea is likely most apparent in Copenhill, a power plant turned ski resort that is one of the most unique green buildings ever created.” 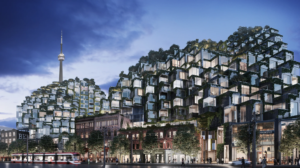 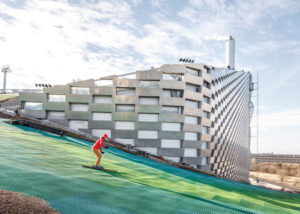 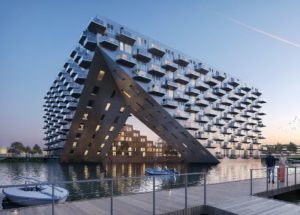 Designer David Epstein is a fan of Frank Gehry and his oft unconventional angular designs.

“In Chicago, Frank Gehry has become a household name based on the architectural creations that adorn Millennium Park… namely the Pritzker Pavilion and the winding steel BP Pedestrian Bridge.

At the time those structures were built, I lived a stone’s throw away and watched in amazement as they took shape, evolving into surreal works of art. It prompted me to look further into Gehry’s body of work, and it is absolutely fascinating. His approach has been described as disruptive – defying conventional design and construction norms with large-scale whimsy.

The scale is most often enormous, taking chances with the interplay between materials such as corrugated metals, steel, wood and glass. He has created structures all over the world, blazing a trail of unique design and crushing norms everywhere he goes. He is still active today with multiple projects in the US, Europe and the Middle East.” 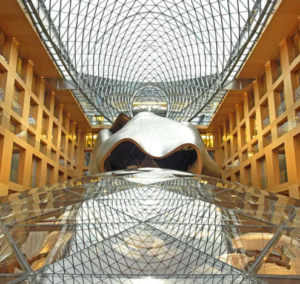 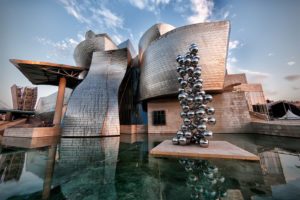 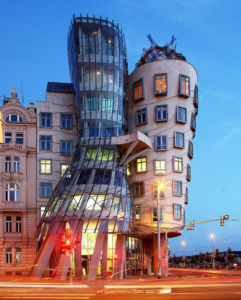 Brittanie Ahrens, Event Designer, is particularly taken by the urban landscaping ideated by WilkinsonEyre – who created the masterplan for Singapore’s Gardens by the Bay.

“The botanical garden in Singapore’s thriving Marina Bay is my favorite architectural endeavor. Called the 2012 structure of the year of the World Architecture Festival, the Wilkinson Eyre– developed frameworks reproduce unique environments– one dry, the various other moist– permitting multiple tourist attractions like a flower meadow and also a thick hill forest.”

In 2006, WilkinsonEyre was part of the British-led team that won the design competition for the masterplan for Singapore’s Gardens by the Bay. The project, comprising three separate gardens covering a total of nearly 250 acres was central to the government’s visionary plan to transform the city-state into a City-in-a-Garden.

The Gardens’ 18 Supertrees tallest steel-framed concrete structures stand at 50 m and the shortest at 25 m. Each Supertree is covered with nearly 163,000 plants of more than 200 species and varieties, including bromeliads, orchids and tropical flowering climbers! 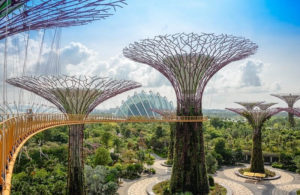 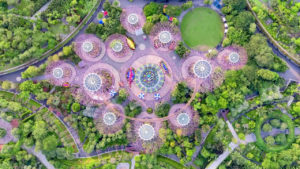 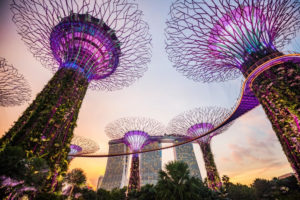 “With her early roots in interior design and architecture, I was always inspired by Zaha Hadid.  She really broke the glass ceiling of female architects and paved the way for women that had the same dream, although she said she never really felt like she fit in with her male colleagues.  She is quoted as saying “As a woman in architect you’re always an outsider. It’s OK, I like being on the edge.”

Her style is so distinct.  She created works of art, not just boring old rectangular buildings.  Her use of organic shapes and odd angles is iconic, and a lot of her work melds into the surroundings, while standing out at the same time.  She wasn’t afraid to push the boundaries of physics and engineering in her designs.  Her interiors are just as unexpected as her exteriors and the way she plays with light and shadow, negative spaces, and materials is totally unique and so well planned.” 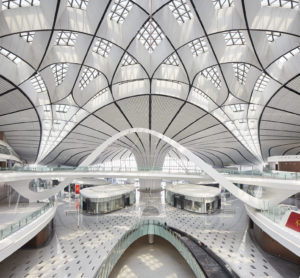 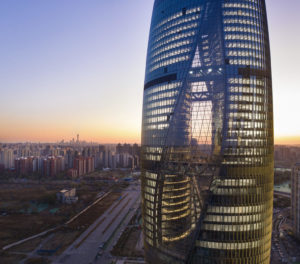 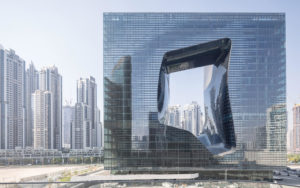 “Though traditionally thought of as a sculptor and landscape architect, Maya Lin also draws her primary inspiration from nature when conceptualizing architecture. Her buildings integrate space with their natural surroundings, always keenly aware of how her structures connect and move people into natural environment. Lin’s designs also incorporate  a striking balance of eastern and western philosophies, as well as merging the old with the new.” 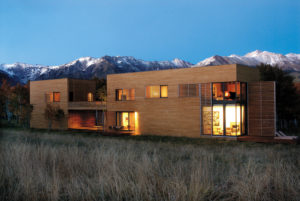 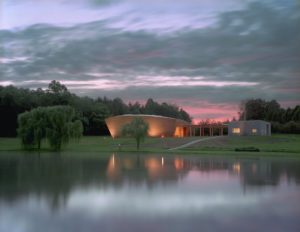 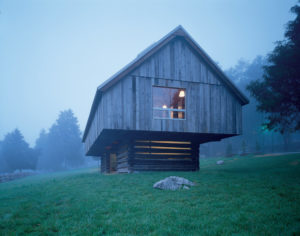 Director of Brand Strategy + Partnerships Marley Finnegan is drawn to the work of Foster + Partners and their industry disrupting 2020 Sustainability Manifesto.

Sustainability is at the heart of Foster + Partner’s design approach. They not only audit projects against global standards – but also have their own, more comprehensive, formal responsibility framework. Climate Change is caused by atmospheric warming brought on by Greenhouse Gas Emissions, as we all should well know – while something people may not know is that new building construction + operations represent 26% of global emissions overall.

With this in mind, they came up with a methodology to define emissions in a nuanced way – to educate clients as to the benefits of bringing new life to already existing structures as this practice can drastically limit emissions.  The existing certification systems focus on the operational energy expended by a building in use; not fully addressing the implications of embodied carbon emissions resulting from the energy required to construct a building and during manufacture.

Below are a few of their beautifully innovative solutions to already existing structures, like an old movie theater turned state-of-the-art Apple Store, “The House of Wisdom,” a contemporary revitalization to a library in Sharjah, UAE, and finally, the enclosure of the Smithsonian Institute’s Courtyard to create an expansive year round mecca of culture + sophistication.

“One of my favorite architects is Lucien LaGrange. LaGrange was born in Paris in the 1940’s and he was raised in Provence. His father was an original stone mason and he learned much about stone and style from him. He went to school in the 50’s in Montreal but later came to Chicago to work for Skidmore +Owings (now SOM).

He later opened his own firm and began his footprint on the Chicago Skyline. He is best known for his classical style in designing high end residential buildings, in which he seamlessly incorporates luxury with lifestyle. LaGrange creations are timeless and reflect Chicago’s unique market.  He shows great diversity in his designs and does not repeat from building to building. A few of his projects include: 40 West Oak, The Waldorf Astoria, 840 Lake Shore Drive, Lincoln Park 2550, The Ritz Residences, the Park Tower, and the Pinnacle.

He is now 80 years old and still working. He is more selective in taking on new work rather than slowing down. His aesthetic is French influenced, but now arguably could be more indicative of Chicago.  He said Chicago gave him his urban style and he could never have accomplished what he has, anywhere but Chicago.” 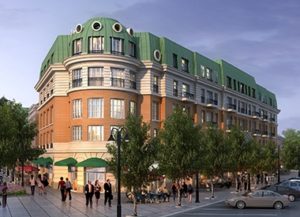 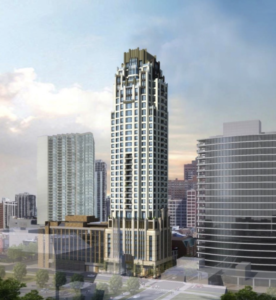 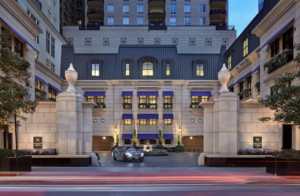 Event Producer Dana Larson takes us way back with her appreciation of the innovative simplicity of Sears, Roebuck and Company’s do-it-yourself homes.

“Between 1908 and 1940, Sears, Roebuck and Company sold 75,000 “kit” homes to people across the country – at their height they offered more than 400 different styles, all sold by mail order catalog; a 4 pound, 1400 page behemoth that could be found in almost every American home.

The low-end styles consisted of only a couple of rooms and no bathroom, although Sears also offered a variety of outhouses in their catalog. High-end style houses included 10 room colonial mansions with amenities like “built-in china cabinets, mirrored closet doors, dining nooks, kitchen cupboards, built in ironing boards, telephone niches and medicine cabinets.”

The concept was simple. Pick a model, send a check, and within a few weeks all the parts needed arrived by railroad. This could include “10,000 pieces of pre-cut framing lumber, 20,000 cedar shakes, screws, nails, paint, doors, doorknobs and even drawer pulls.” A person with only rudimentary carpentry skills could put together their very own home within 90 days, according to the sales copy.

Research shows that 50% were built by the homeowners themselves with the help of friends and neighbors. A Sears home showed America that housing could be standardized and affordable as well as attractive and well-built. 10,000 homes still stand across the Northeast and Midwest, 200 of which have been verified as authentic Sears homes right in Elgin, Illinois. In 2016, a 1925 Colonial-style home in Chevy Chase, a suburb of Washington, D.C., sold for $1.06 million dollars. It was a Sears, Roebuck and Co. kit home, the Martha Washington (left), advertised in the company’s catalog for $3,727 in the 1920s.” 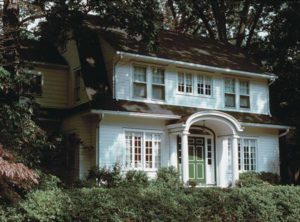 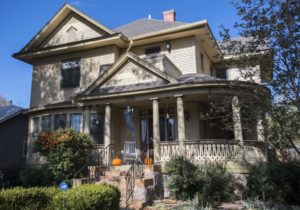 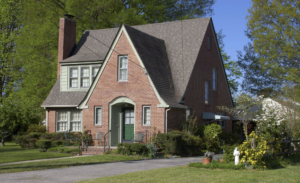 “I first learned about DS + R while living in Boston. They designed the Boston Institute of Contemporary Art, which I frequented while living there. What drew me to their style was the way it seemed to incorporate seamlessly into the nature around it. I’ve since learned that this architecture group has led many projects in becoming ingrained into the surrounding nature and providing eco-friendly solutions to their construction and design — which has left me on board for their artistic and modern projects ever since. Their commitment to honoring the spacial and emotional connections between humanity and nature makes their designs even more beautiful.”

Some of their other work includes the Brooklyn Highline, the Lincoln Center for the Performing Arts, the upcoming expansion of the MOMA and many more cultural groundbreakers. DS+R believes that how space functions in our culture illustrates that architecture, when understood as the physical manifestation of social relationships, is everywhere, not just in buildings. 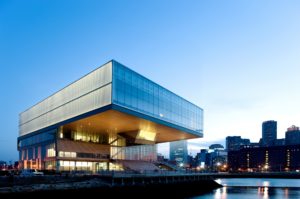 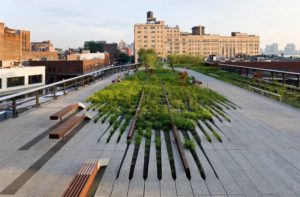 There are so many architectural marvels covered in this article, but we would be remiss if we didn’t also shout out one of Chicago’s most innovative females architects, Jeanne Gang and her team at Studio Gang.

Jeanne has been quoted as saying “Without an intellectual construct, life is boring,” which is why we relish these opportunities to fire our synapsis via these monthly installments and share our thoughts and feelings with those of you whom we are so lucky to have listening.

On that note, we’ll leave you with a few of Studio Gang’s local projects, one of which is a 5-minute walk from my house. 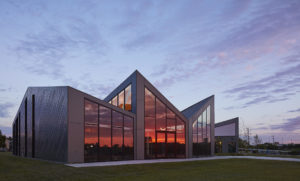 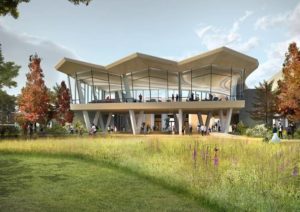 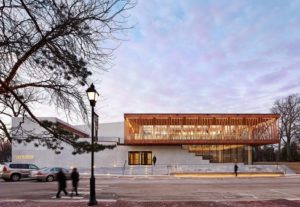 Until next month, when we cover Fashion Design, enjoy this tail end of summer splendor, ya’ll.