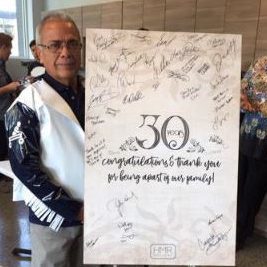 Celebrating 30 years, HMR Designs recently acknowledged the retirement of one of its behind the scenes giants.  Every event design has operational components, and Conrado Gonzalez was one of those people, serving as HMR’s Vinyl Department Manager.  In this role, Conrado ensures that custom dance floors are erected, as well as vinyl tiling of both the walls and the ceiling.  Conrado started with Ronsley Special Events, where he worked until the merger with Heffernan Morgan and Botanicals — several years back.  His institutional knowledge of both the event industry, and Ronsley Special Events, will greatly be missed

Originally from Stockton, California, “where the big guys are from,” Conrado loves to ride motorcycles when not transforming HMR’s most visually significant events.  His most memorable accomplishment with HMR was constructing a dancefloor at the Sheraton composed of seven different colors. Conrado considers himself to be a very patient and tenacious man who is willing to work hard, and takes pride in what he does.  Outside of HMR’s doors, Conrado enjoys spending time with his family, and is happy to wake up healthy each day.

Several team members at HMR have some notable memories to share about Conrado.  Below we highlight the Conrado memories of David, Jim & Doug.

David Epstein, HMR’s Head of Corporate Events, has fond memories of Conrado’s stewardship as a colleague. Most notably, David and Conrado would travel each year to design and construct the annual Super Bowl after party.  “Conrado can always be counted on to get the job done well,” David says, “and he is just an overall great guy.”

Jim Losek, Head of Operations for HMR, recalls Conrado as: “the type person where when we were working on an event at the Bellagio in Las Vegas, Conrado would be found eating at the Denny’s down the street.” 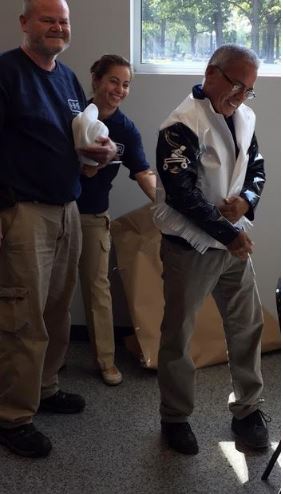 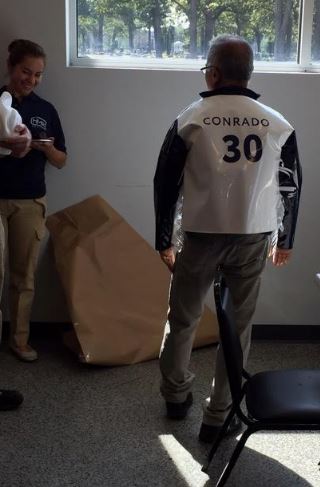 Doug Oeste, HMR’s Technical Director, remembers Conrado:  “We’ve all been so lucky to work alongside Conrado, a true master of his craft. An expert in vinyl, production and installation, there was almost nothing that Conrado didn’t do in his thirty years as a member of the Ronsley and HMR Designs families. He climbed, stretched, crawled and contributed his expertise to nearly every element of installations, as well as regularly assisting in on site crew coordination and perfection as well as and in-house production.  Meticulous and thorough, if you asked Conrado to do something, you knew he would do it well without ever needing to be asked twice. In addition to his skills, he was also a friend, and a dependable face in the morning that you could always count on to ask how you were doing, and really mean it. Congratulations to Conrado on his newfound freedom. He is truly irreplaceable and will be sorely missed by us all. 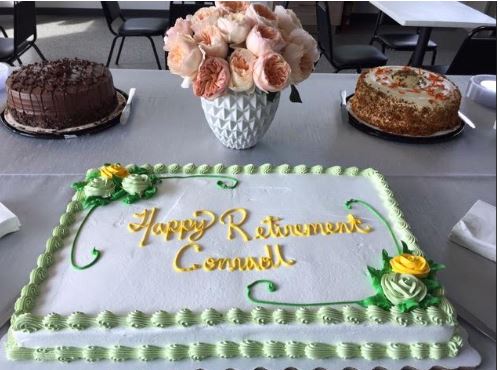 The HMR community and family celebrated Conrado’s service to the organization with a farewell party in the middle of September 2017.  Bob Mertzlufft, HMR Design’s President, & Byron Boone, General Manager & Owner, presented Conrado with a lovely designer watch as a symbol of the organization’s appreciation for Conrado’s tenure.  Farewell Conrado, and enjoy your next big event: your retirement!