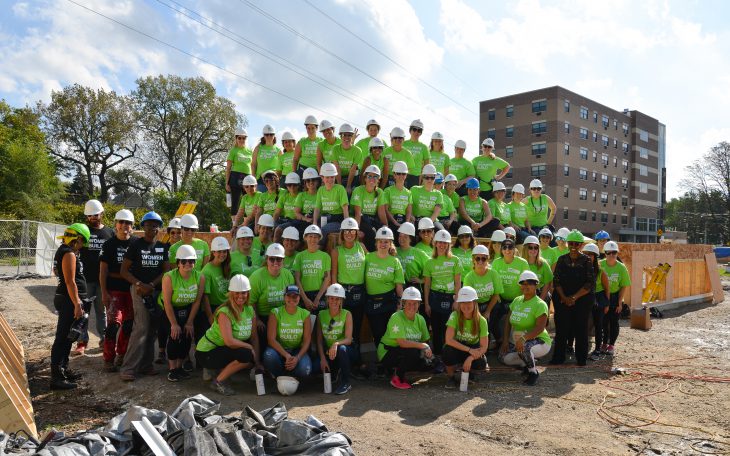 As a company we’ve always believed in lending a helping hand wherever and whenever we can, and it just so happens that this month we sent a crew of our fearless HMR women to put down their smartphones and pick up a hammer. For the third year in a row HMR Designs served as a proud sponsor of Habitat for Humanity’s annual Habitat Women Build Event.  Everyone from designers and producers to the city’s top DJs and wedding planners got their hands dirty to build a house for this incredible organization.

For those unaware of Habitat’s mission, it’s goal is simple: “build a world where everyone has a decent place to live.” Through community outreach, volunteer handiwork, and tremendous fundraising efforts, HFH has made homeownership a reality for those who otherwise couldn’t afford a place of their own. This specific chapter of the organization has dedicated hundreds of hours to building up the South Side of Chicago, which is where over 50 of the city’s top female event professionals found themselves on Tuesday, October 9th.

Four sites were worked on throughout the unexpectedly hot Fall day, two of which were just bones of what is soon to be a pair of beautiful Habitat homes. Donning hard hats and tool-belts, teams of women found their way around power saws, sledgehammers, and countless slabs of plywood to complete the first floor foundations of two homes.  Down the street another pair of nearly complete properties received the finishing touches with women prepping, mixing, and painting every inch of the otherwise bare and dusty walls.

During a short lunch break the teams heard from a Habitat homeowner who relayed the positive impact that Habitat – and this event – has had on her neighborhood. For several years HOH has been building out an entire block of energy-efficient homes in West Pullman, working with community leaders to keep their streets flourishing for a brighter future. “We don’t just want individuals to survive; we want neighborhoods to thrive,” is a common vision statement heard from HOH and it’s clear that their efforts are paying off. Over the course of this event, women participants (including our teams and others who volunteered in the days following) have raised over $200,000 for this incredible initiative.