Visual Art cannot be confined to a singular viewpoint. It is limitless in its interpretation – and cannot be constrained to a person, place or even a thing.

Recently, Italian artist Salvatore Garau sold an invisible sculpture for $18,000. The work, titled Io Sono or “I Am,” doesn’t exist except in the artist’s imagination – “It is a work that asks you to activate the power of the imagination, a power that anyone has, even those who don’t believe they have it,” Garau said at the unveiling. “Now it exists and will remain in this space forever. You do not see it, but it exists. It is made of air and spirit.”

Whether that extreme example is outrageous or invigorating is simply in the mind of the beholder – you.

Many of us, when growing up, heard terms such as “starving artist” prevail, discouraging many would-be artists away from a life of creativity to pursue a career guaranteed to be financially “fruitful.”

Unlike this misnomer, the most ancient human art dates back to the Late Stone Age, possibly around 70,000 BC. The creative capacity within early societies exemplifies evolutionarily advantage for the most artistic individuals. Since survival was not contingent on the creation of art, art-producing individuals demonstrated agency over their circumstances in that they had spare time to create once their essential duties, like hunting and gathering, were completed. These preliminary artists were  most definitely “highly gifted” within their communities and indicated advancements in cognition and understanding of symbolism in astonishing ways considering the evolutionary advancement of the time.

There are so many incredible and inspiring artists from all eras of human history.

“Ashley’s take on pop culture is noisy, impactful and daring. Her talent as a painter is also incredible – and her use of strong female subjects never ceases to inspire. I appreciated her recent floral astronaut collection, inspired by the isolation of the pandemic – chic and fun but also complex – solitary + alone, surrounded by a world of vibrant color and beauty.” 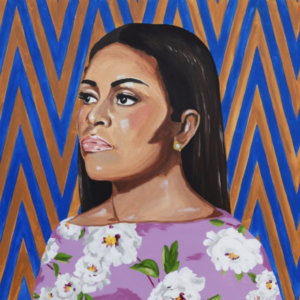 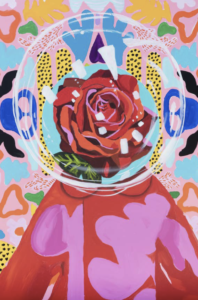 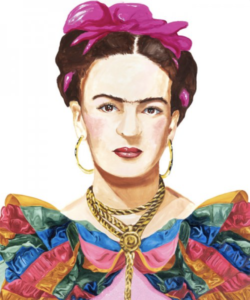 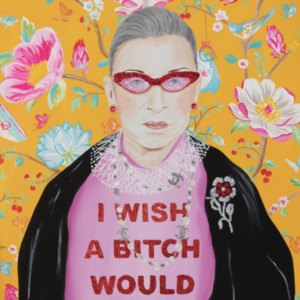 Marley Finnegan, Director of Brand Strategy + Partnerships, is taken by the work of artist Kehinde Wiley.

“I first learned of Wiley’s work when I saw the stunning portrait he created of former President Barack Obama. At that time I failed to realize that originally, he painted strictly black and brown men in the style of formerly only white noblemen, featuring variations of styles and eras, rooted in exacting historical reference.”

Only somewhat recently did Wiley begin painting women in his portraits, saying “The reason why I am painting women now is in order to come to terms with depictions of gender and the way it is featured art historically – a means to broaden the conversation.”

His latest series, “An Economy of Grace” is an “investigation of the presence of women in painting, but in a broader sense, it is a investigation of the negotiation of power in image-making.” For this body of work Wiley looked to 18th and 19th-century society portraits for inspiration. At that time it was common practice for nobility to commission unique clothing for portraiture. Wiley + esteemed fashion house Givenchy are working collaboratively on this project to revamp that tradition for the 21st century – and the paintings do the parties involved the modern day nobility they are deserved. 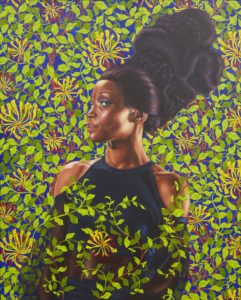 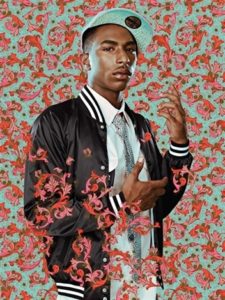 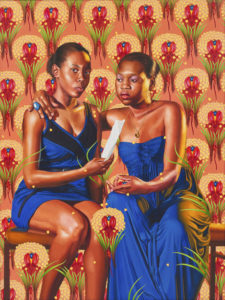 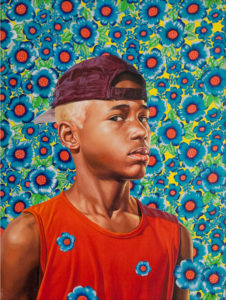 Event Designer Natalie Walsh is taken by the intricate details in the 3-D works of Anila Agha.

“I am often stopped in my tracks to admire the effects of shadows, especially those of flowers. The powerful and simple meeting of form and light on a single plane creates clarity of object and purpose to me in words that are far better explored by the artist, Anila Agha. “I am fascinated by the interplay of presumed opposites that are never quite so: male and female, the definite and the amorphous, the geometric and the organic.” Her laser cut steel, single light filled sculptures are enchanting, meditative, and intimate, evolving around socio political topics, history, and the complex emotional experiences faced by all human beings throughout life.” 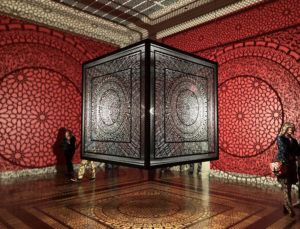 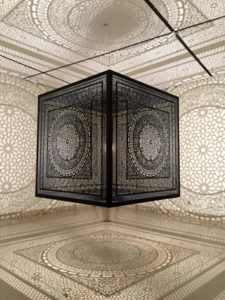 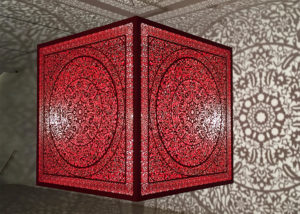 “Basquiat was an American – Caribbean artist from Brooklyn.  He lived a short but explosive life. He was born in 1960 and died in 1988. He was a neo – expressionist.  He portrayed recognizable objects, such as the human body in a rough and emotional way. His paintings were vibrant and powerful with bursts of brilliant color.  Everything he painted was raw and brutalistic.  His paintings were massive and monolithic.  His Art reflected the New York art scene from the 1970’s and 1980’s. He started as a graffiti artist and this style transferred over into his later artworks – and he had no art school background.  He claimed he learned about art simply by observing it. His art was anti-establishment, anti-religion and anti-politics.

His art was about human essence rather than physical likeness. Basquiat’s paintings were not representational but were dynamic in their style with aspects like colorful slashes and dripping paint. I find them to be gritty and powerful. During his short yet impactful life he skyrocketed to fame and riches. Unfortunately, he fell back to earth just as quickly when he died of an unintentional drug overdose at 27.  His unique style and nuanced approach make his art a source of inspiration for many.” 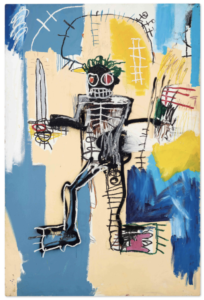 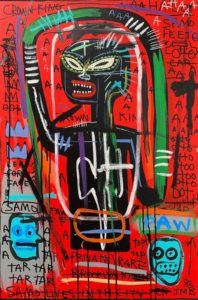 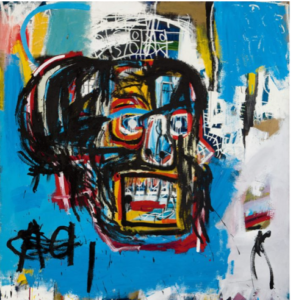 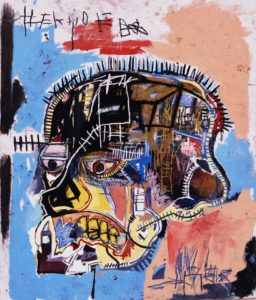 Francine Turk got her big break when her charcoal nude pieces were featured in the 2006 Jennifer Aniston and Vince Vaughn-helmed film The Break Up. In demand from avid collectors and interior designers alike, Turk’s work was most recently seen by the masses on the hit show Empire. Her work has had so many iterations and the work which has made her the most famous is only just a scratch on the surface of her catalog of work.

Turk is also well known for her unique fashion sense. She says, “Because everything I own ends up covered in paint I embraced the fact that my wardrobe is basically a collection of one-of-a-kind “works of art”. This usually consists of denim and tees with designer boots or a kick ass high heel. I used to struggle with dressing for occasions outside of the studio but ironically, since I’ve started to show up everywhere looking like this, I am constantly asked, ‘Will you make those jeans for me?'”

She takes a lot of inspiration from music. Francine is quoted by Rag & Bone as saying “I think artists like Jimi Hendrix and Jack White have a way of getting down to the essence of human emotion in a way that not many human beings are capable of doing. Their authenticity resonates clearly for me and it is that profound rawness that turns me on. To put it simply; they are fearless truth.” 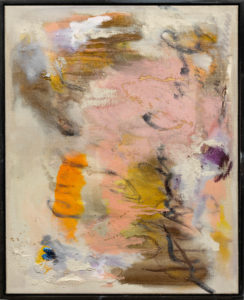 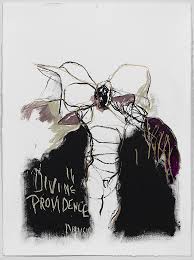 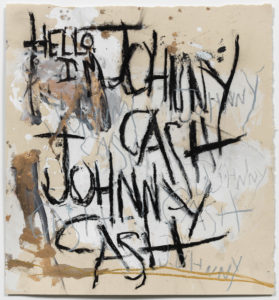 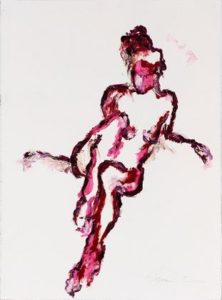 “Nick Cave is a local Chicago artist who works in a variety of mediums including dance, sculpture, performance and fashion. Using a variety of unexpected, often everyday material, Cave creates mesmerizing, kinetic experiences that form visual memories that will stick with you long beyond their initial exposure. I love the way events mimic his work at times – they both activate multiple senses and bring a feeling of togetherness through the movement in a common space. It is that everyday poetry that I can’t get out of my head. Check out some of his performances online and tell me you’re not entranced! Cheers to one of the coolest Chicagoans bringing our city to life!” 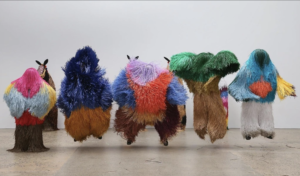 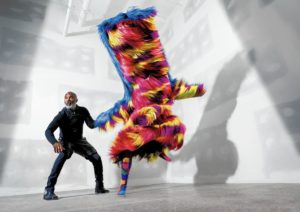 David Epstein, Event Designer, has always had admiration for the dynamic duo that is Christo and Jeanne-Claude.

“This husband and wife team has always inspired me with their imagination and sheer scale of their ideas and endeavors. Fabric work is such an integral part of event design – I’m always on the lookout for dynamic ideas that push the envelope. The first time I saw Berlin’s Reichstag completely wrapped in fabric, I thought there was no way somebody ACTUALLY did that. But that’s just the beginning – they wrapped the Paris Pont Neuf bridge, constructed a bright orange curtain across a Colorado valley and even surrounded full islands in Miami’s Biscayne Bay in floating pink fabric. Their work spans thirty years…the creativity and vision are inspiring, but the production and logistics (especially working outdoors) are what truly blows me away.” 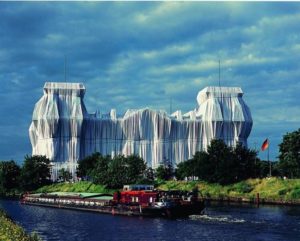 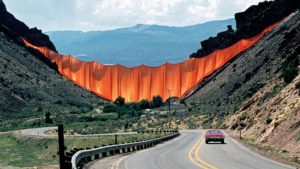 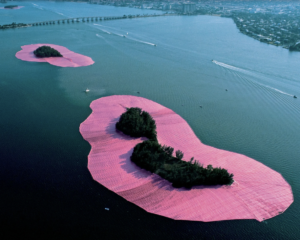 “There is so much interest and intrigue around the life of Andy Warhol. It was as if it was his dream to be madly famous and known by all but also somehow keep his personal life a mystery. Even with wild parties in his NYC studio “The Factory” – and countless films, shoots and other forms of media – he ultimately was shy and quiet in such a way that it always kept people wanting more. The phenomena of Pop Art and how it truly shook the art elite was a level of disruption not before seen. His approach to his works through screen printing and limited release could be a study in business dynamics as well, as for much of the past 50 years, he had been highest revenue generating American artist until he was recently surpassed by the late Jean Michel Basquiat.” 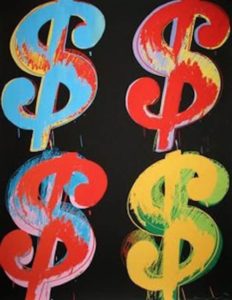 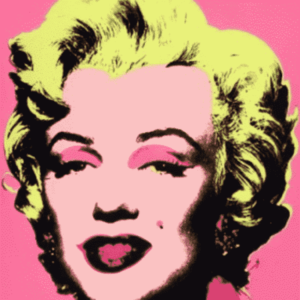 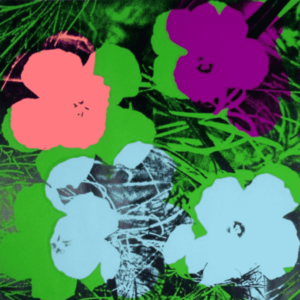 As usual, thanks for sharing some of your oh-so-valuable time with us and our musings. We appreciate having the opportunity to think creatively outside of our day to day industry and share these personal insights with you.

Next month we’ll be back yet again covering our favorite Architecture. In the meantime, enjoy that juicy watermelon, a crisp, cool beverage, warm sunshine and all that comes with the beauty and freedom of a gorgeous summer day.